If you’ve seen our previous blog post about bathroom remodelling, then this will be a different approach towards the same concept. Creating space, but with large bathroom tiles.

But the bathroom we see before us isn’t as cramped as the last one, so a different approach is needed. Luckily, the team behind this remodel only had to follow 2 suggestions from what the homeowner said. Fit in a freestanding bath, and use large tiles. An easy task.

As you can see from the before picture, the tiles were already huge, but the client wanted bigger. There’s a reason for this, and it’ll be explained further down the post.

As the physical space of the bathroom was already spacious enough, we wouldn’t need to move anything.

Reworking plumbing and electronics can be a timely process to get right, and making sure the right people with the right skills are available when needed, can add to the time taken to do a job like this. We only do what we have to do to meet the goals of the client.

So, the bath, the sink, and the toilet, are fine where they are. Moving things around wouldn’t have a functional reason. It would only increase the amount of work for the team, and the money spent for the client. Which doesn’t meet the goals of either side.

What can be done, is updating the design to become more modern. The previous design is already on the line of modernity anyway, it just requires an extra push to join the big leagues. This can be done by changing to a brighter colour scheme, which will compliment the tiles we’ll use later.

The contrasting wooden cabinet with the mirrors, doesn’t blend well with the current colour scheme, so as part of our plans, we’d have to remove that and replace it with something new.

You can’t change a bathroom design without removing everything first. The team removed the exterior tiles on the walls, as the larger format tiles would need to be placed later.

The wooden cabinet area has to be considered with more thought than usual. Regarding functionality, this space offers great storage for bathroom supplies, and when remodelling a bathroom, you want to avoid leaving your client with less than they had before.

This can be solved by introducing a built-in mirror cabinet, that offers the same amount of space, but also matches the future design we plan to incorporate into the new colour scheme. The bigger mirrors also lend well to the space feel of the bathroom, which we’ll elaborate on further.

Electronics and plumbing didn’t need to be changed for this remodel. The goal was pretty clear, and going the extra mile for no good reason isn’t how we work. We’d still have to remove the fittings to perform work on the ceiling, but the positioning could stay in the same place.

Now we can finally explain why large tiles are a good choice for spacing reasons. Why choose bigger? The tiles are already quite big, wouldn’t it just result in the same conclusion? Wouldn’t it still feel like the same size?

Regardless, it’s our job to follow the customer’s request. It wasn’t confirmed if the request was researched beforehand, but it was an extremely smart request, as it helps solve the challenge of increasing space, or at least the illusion of it. We do what is asked, and we make it work. Even so, with the obstacles in front of us, it had a remarkable outcome.

The reason for bigger tiles is a psychological one. We talked about this a little in the previous post, You might not think it immediately, but these tiles also induce some form of brain trickery you’d never think about.

Because you can count, and allocate space, you have an easy grasp of the true space of the bathroom. On that same subconscious level, the part of you that’s already figured out the space, it will put too much emphasis on the space that isn’t there, rather than the space that is.

Now, with these new tiles, they give off the illusion of one  coherent smooth surface. No hugely visible lines, no distractions, it’s essentially just a normal wall and floor. The eyes recognize it as such, so they don’t place too much importance on the things that stand out. Plus, with this, you still get the shiny tile look, which adds itself to the modern design we’ve come to know and expect from our remodels.

As said, nothing needed to be moved around, as the physical space used is already optimized, and doing this would add a larger bill to the client. This doesn’t mean that they’ll be left alone, however. We can still upgrade them with a more modern look to add to the overall design of the bathroom.

The bath and shower area was replaced with a modern design, with classical inspirations for a more refined look. We removed the shower option due to the customer’s request, and replaced it with the freestanding bath they asked for.

The sink was replaced from a wall mounted wide basin, to a standing basin. It’s still wall mounted, but the extra superficial fittings to the bottom of the basin complimented the colour scheme. It matches the bath taps and the mirror, to which we’ll talk about next.

The mirror was added for usability and the illusion of space. If we see more of a room, even a reflection, we will subconsciously think it’s bigger.

To not sacrifice any space for storage, these mirrors can be opened. And as it’s in the same space as before, there’s zero guess work for the client as to knowing where to put things. It adds familiarity to a new, modern, and simplistic design.

And here is visible proof of the effectiveness of large format tiles. Through a few simple visible changes, and some slight tweaks here and there, this bathroom looks way more spacious, without actually moving anything around.

A remodel doesn’t have to be a complete overhaul. With a talented team, or a creative individual, the methods to meet a goal can simply lie in the materials you use.

Modernity lends itself well to simplicity. With fewer distractions to look at, this being the previous tiles, it means less subconscious strain of habitually picking up the minor details.

Not only should it look good, it should feel good to use and be inside. Whatever your goal is, it can be achieved. The only limitation is talent, skill, and your ideas.

Make sure to consult an expert before you make any changes. Buildiro lists top quality products from approved vendors, so you don’t have to worry about what you’re buying. Start your search for the product you require here, and leave the rest to us. We’ve got you covered.

The Modern Bathroom Remodel: Discovering Space In A Tiny Bathroom

Project made by: LM Solutions Ltd.

Proud of your new kitchen? Bathroom got a makeover? Send us an email about it at magazine@buildiro.com, and we’ll write about it in our magazine! 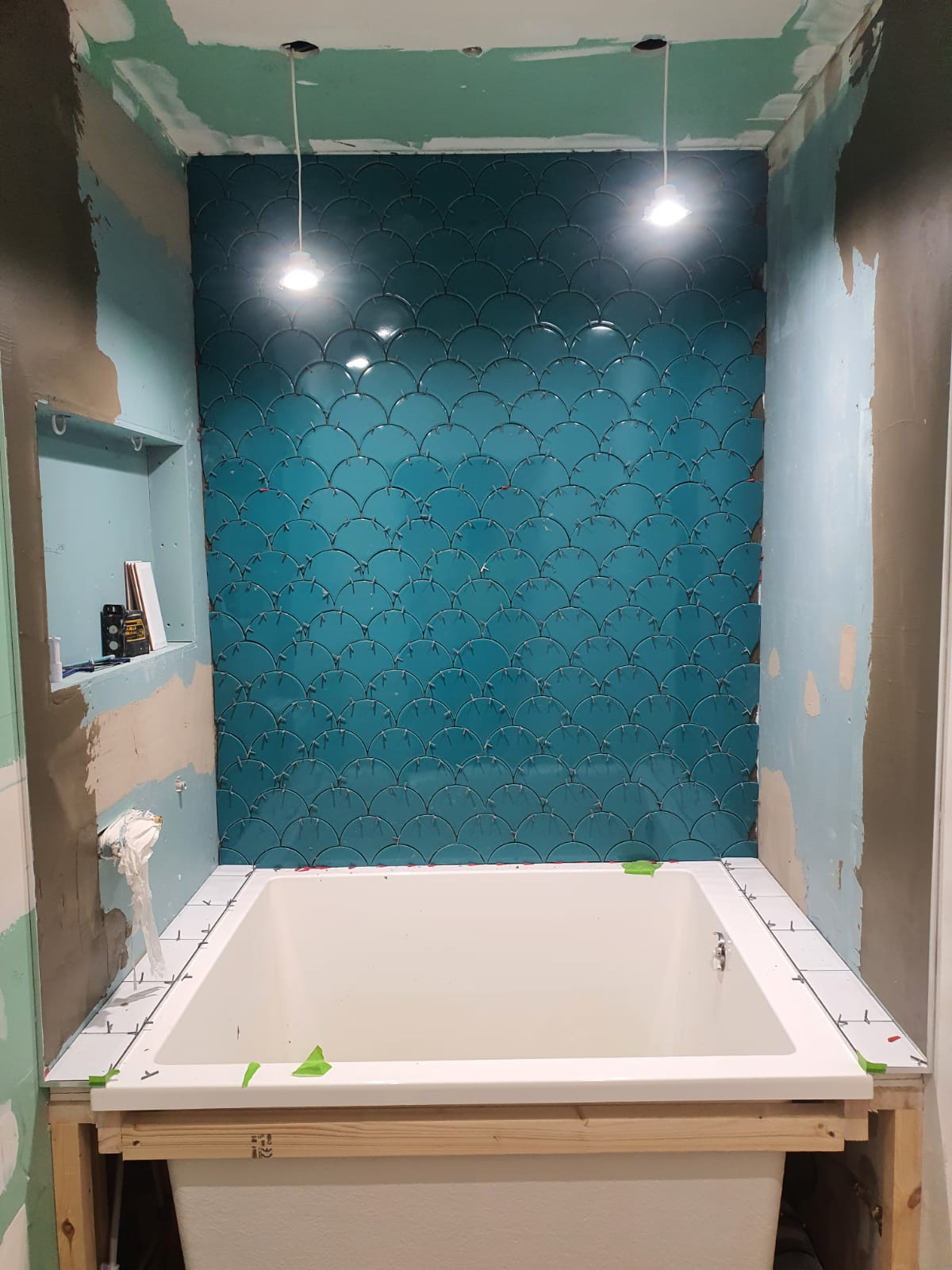